“Make things as simple as possible, but no simpler.”

Minimalism has been around for years, but every few years it crops up like it’s a new idea.

And this is one of those times … even as COVID made hoarding toilet paper and cleaning supplies seem like a good idea.

To be clear, the pictures you see in magazines and online talking about the virtues of less ARE of beautiful, simple spaces.

It’s easy to look at them and think, “Wow. My life would be SO much easier and better if my space looked like that.”

But here’s the thing. Your stuff isn’t your problem—you are.

If you got rid of everything you owned, what would still be in your life? YOU would.

So the stuff would be gone but the problem would still be there.

You do want to let things go mindfully—and not reactively, chasing after a surface fad you may not understand or haven’t fully embraced.

Speaking of which, check out my perspective on Marie Kondo and The Home Edit.

There’s a difference between simplicity that’s aligned with your values and forced deprivation.

So let’s break down those differences now.

In the act of paring down your belongings, appropriate simplicity looks like this: What are the things you own that no longer serve you?

When you release those, you’re left with stuff that adds value to your life and has meaning to you. Stuff that’s functional, or lovely, or both.

Stuff you actively WANT to own and actively USE.

Deprivation looks like asceticism and denial, a stripping away of things for the simple purpose of having less … based on dogma, not values.

Where minimalism often goes wrong is in confusing deprivation and adherence to dogma for curated simplicity.

Aesthetics and cost are not the primary drivers behind simplicity.

And there are no rules about how many things you can own when you opt for simplicity.

It’s not about more or less.

Simplicity is about owning what is needed, and nothing extra.

HOW DO YOU (REALLY) WANT TO SPEND YOUR TIME?

Here’s a picture of my living room:

Some people would want more things in there. Some would want less. But for me, it’s just right.

And since it’s MY living room, I get to have it the way I want it.

It might look sparse to you, or it might busy, but everything has a purpose and is useful, and beautiful to me.

I have an LED candle on a stainless steel bench, because I love both things. I don’t have 3 candles—just because I love the candle doesn’t mean that more is better. I only need the one. 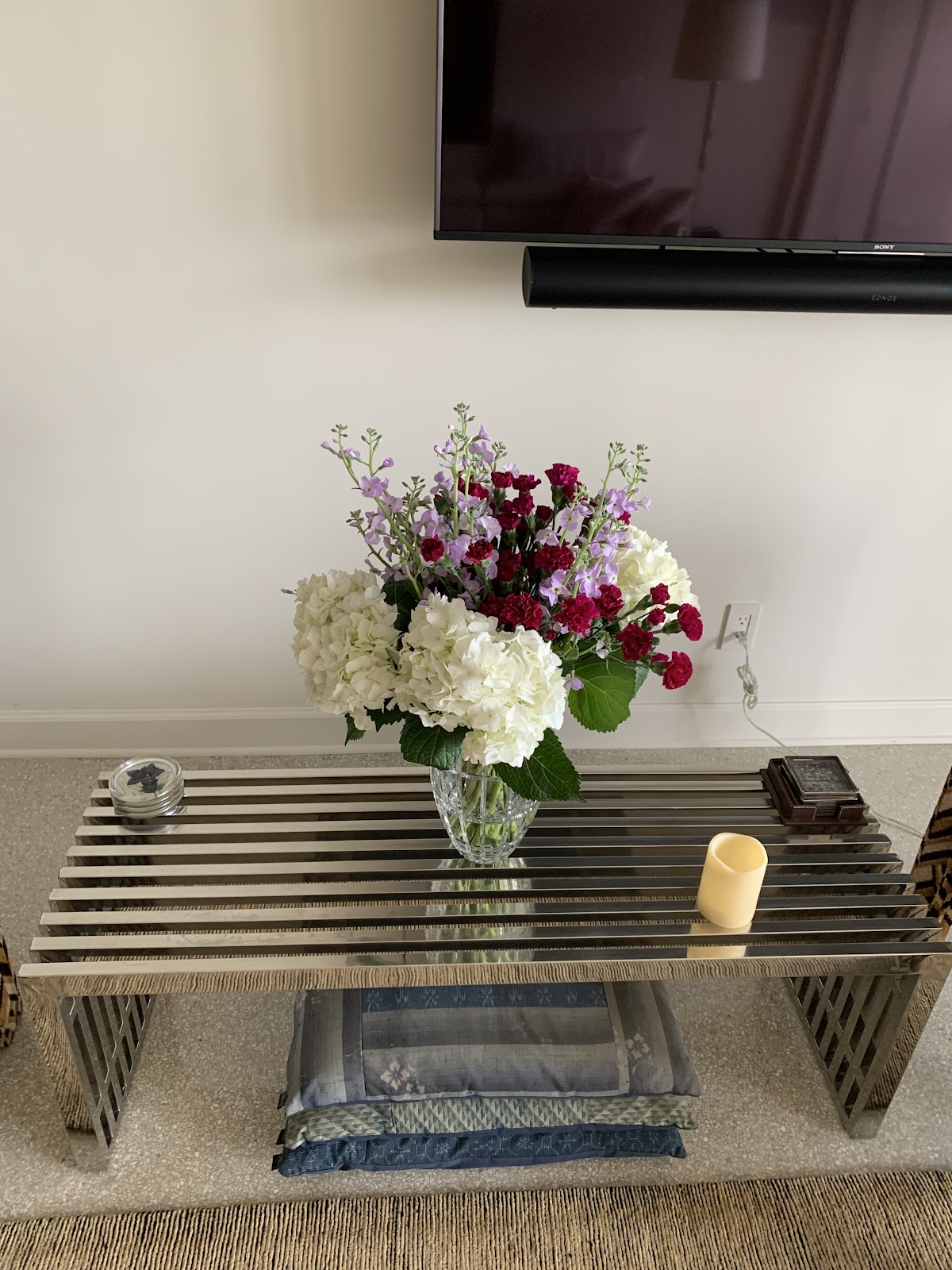 I have a few coasters, a vase and the candle. And when the flowers fade, the vase goes back in the cabinet.

I’m not going to get rid of the bench or the candle or the vase or the coasters because I own more than 100 items, and they aren’t strictly necessary to my life.

Some could say that my toothbrush isn’t strictly necessary to my life … maybe I should just floss twice a day?

You can see how slippery that path can be … who ultimately decides what is necessary for you? You do.

I have room for them, they serve a purpose, they are attractive and they increase the quality of my life.

When I left NYC, I gave away a bunch of baking supplies … I didn’t anticipate making a lot of muffins in Florida.

I had them when they served me and I let them go when they didn’t.

For me, that’s the end of the story.

I also don’t want to spend hours ruthlessly discarding things simply because Minimalism tells me that I should.

Adopting a minimalist life and then forcing yourself to constantly edit, trying to own X number of things or fewer, means that you’re STILL spending more time with stuff than you need to.

I would rather be focused on experiences and relationships rather than inanimate objects.

And I definitely don’t want to prioritize the what over the why.

When you do that, you’re capitulating to someone else’s rules for how you should live your life instead of choosing your own.

You end up serving the system, when it should be the system serving you.

THE LUXURY OF LESS

Minimalism is the idea that “less is more,” that shedding all of our earthly possessions is the path to joy.

Now, if you have taken a vow of poverty and gone to live in an ashram, that’s one thing.

But if you’re living in a tricked out studio apartment, humble-bragging about how you’ve gotten down to just one Rothko … because it’s really all you need to inspire you … screw you.

And I’m a little fed up with wealthy tech millionaires who are newly converted to minimalism showing off their 1 jacket that cost them $5,000 from a bespoke tailor as if that is the right or best or only way to pare down.

Frankly they remind me of smug reformed smokers who feel the need to constantly point out the damage done by second-hand smoke. Those of us who never smoked already know that and people who are still smoking don’t care.

Try telling a single parent with three kids that she needs to move her family into a tiny home with as few possessions as possible and see how that conversation goes.

My point is, life is not one-size-fits-all. You don’t need to squeeze your life into someone else’s concept of good or right.

Especially when that concept confuses the method for the result.

Whenever a philosophy takes over as the END, rather than the MEANS, we’re wasting  energy and attention.

Far better to identify your core values, and what matters to you, and fill your life with that as a priority.

You can get rid of the extra later.

Find out what matters to you, what YOU consider essential and what you have room for.

If you genuinely love shoes, the 3 pairs a minimalist owns will make you feel deprived and bereft, not happier.

On the other hand, if you love shoes and keep buying them for the sake of owning them, and then never look at or wear them again, that’s not serving you, either.

There’s a middle way where you have enough of everything that serves you and nothing that doesn’t and that is the right amount of stuff for YOU.
Find that point, settle there and then get on with the rest of your life.

For a system that helps you FIND that middle point so you can organize your home and LIVE your life with balance, check out The Unstuff Your Life System®, which starts on January 26!